Tennessee High School students go on a field trip to a Mosque and a Temple, Fox makes a big deal out of it.

MY TALKING POINTS ON SEAN HANNITY

Reference: Students from a Tennessee High School go on a field trip to a Mosque and a Hindu Temple, they were given copies of the Quran, a few accepted and few did not, a few joined in the meditation and few did not – what’s the big deal about it? 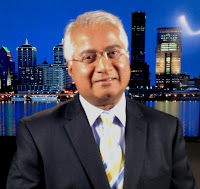 Sean, I am with the parents, I want my kids to go to all places of worship or none. However, in the given time limitation, you learn what you don’t know, and not what you already know. It makes perfect sense to learn about Hinduism, Islam, Sikhism and others who have been misunderstood and a target of bigotry.
Most kids in schools have a good idea about Christianity and Judaism. Ideally, they should be scheduled to visit all places of worship, including Pagan and earth based religions.

Sean we have problems in our society because we don’t know each other and what we know about the others are bad things that are not true.  Given that, the school trip is the right thing to do, the kids need to know about other faiths.
Within a decade, there will not be a work place, restaurant, movie theater, football game, or public transportation or the airplane where you will find people of different races, religions and ethnicities – and with that conflicts are bound to arise, this is a good thing the school is doing the field trips.
We owe it to our kids not to be dumbfounded when they run into a Sikh, Hindu or a Muslim.
A few kids accepted the Quran from the Mosque on their field trip, and a few did not, a few joined the meditation at the Hindu Temple and a few did not. They had a choice, what’s the problem with Fox News with that? Would you rather them grow up as bigots?

If we care about America, we have to build a cohesive society where no American has to live in fear of the other, and fear mitigates when we know each other.
Please note – the uplink did not work, and the video message did not get transmitted last night, a first time on Fox News. Sean went solo on the segment with Todd Starnes who wrote the story.
http://nation.foxnews.com/2013/09/17/starnes-students-take-field-trip-mosque-receive-koran


Mike Ghouse is a public speaker committed to building cohesive societies and offers pluralistic solutions on issues of the day. All about him at www.MikeGhouse.net
Posted by Mike Ghouse at 8:33 PM