This is a great story for people of all faiths to read and learn about America. America is amazing. It opens up peoples hearts and minds.

The story is same from Aztec Americans to Zoroastrians Americans and every one in between, the first generation finds ways to assimilate and see the wisdom of their religion, that most people did not see back home, they just practiced their religion.
The youth are able to differentiate between culture and Religion, their culture is America with heritage of their parents culture. They youth know a lot more about Hinduism, Islam, Buddhism, Jainism, Sikhism and others than their parents. Either parents were too busy with life, or just don't see the need to unload what was dished out to them. I see the stinky attitudes in a lot of adults from India, Pakistan, China, Italy, Russia, France or wherever..
Mike Ghouse
Americans Together
www.MikeGhouse.net
In Texas, young Hindus want to Americanize ancient faith

http://religion.blogs.cnn.com/2011/07/10/in-texas-young-hindus-want-to-americanize-ancient-faith/
Houston, Texas (CNN) – In many ways, 29-year-old Rishi Bhutada is a traditional Hindu, not so different from his Indian-born parents.
An officer at his dad’s pipefitting company, Texas-born Bhutada had an arranged marriage in India three years ago and then brought his wife back to his hometown, where they recently welcomed a son.
Bhutada is a strict vegetarian and avoids alcohol, as do many observant Hindus. 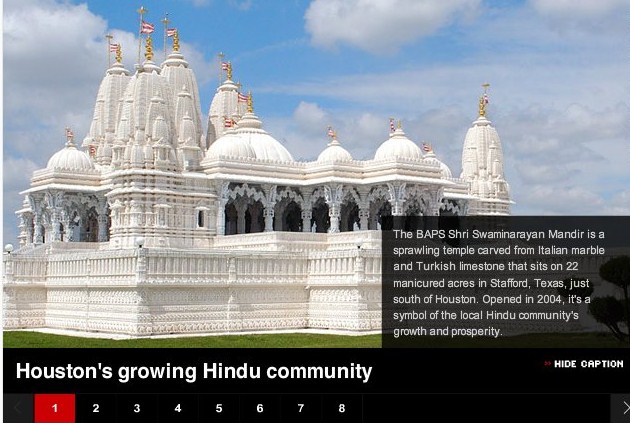 Mumbai, July 13, 2011. Three serial blasts have hit three different parts of Mumbai, killing 8 and injuring several.
When tragedy hits, we need to come together and focus on finding the fountain head for such evil acts and remove the cancerous cell and hold on to the temptations to blame anyone else. Blaming will do further damage to the society in times like this. This would be patriotic thing to do; to preserve life and safety of citizens.
If you committed a crime, let’s haul your ass to jail and bring justice for the crimes against the public. Your parents, siblings, spouse, neighborhood, community, religion or state has nothing to do with your evilness. If we want justice and peace, get the bad guys and not mess with good people.
Let no Indian look at the other with suspicion, out of a 1.2 billion people a dozen are responsible for this cowardice, we need to get them and get their fountain head. That is the right thing to do... one mishap should not tear India further apart. Hold on to the temptations to blame and you will serve your motherland right.
This is the time for us to come together.
As an American Indian Muslim I condemn this acts of terrorism.
Jai Hind

Mike Ghouse
http://mikeghouseforindia.blogspot.com/
Mike Ghouse is a speaker, thinker, writer and a frequent guest on Hannity show and nationally syndicated Radio shows and Dallas TV, Radio and Print Media. He presides America Together Foundation and is committed to building a cohesive America and offers pluralistic solutions on issues of the day. Over 1000 articles have been published on Pluralism, Interfaith, Islam, India and cohesive societies. Two of his books are poised to be released this fall on Pluralism and Islam. He is available to speak at your place of worship, work, school, college, seminars or conferences. His work is encapsulated in 27 blogs, four websites and several forums indexed at http://www.mikeghouse.net/
Posted by Mike Ghouse at 11:22 AM No comments: