Model of Democracy, the Indian Idol 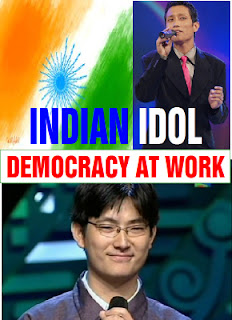 Democracy means different things to different people. I will present a few different aspects of democracy in the coming weeks as the events unfold in the Arab World.
Democracy is about choices and the freedom to choose what one eats, wears, believes and seeks in the pursuit of happiness without being harassed or humiliated.  It is the unhindered choice available to every citizen equally.
The Asia Bibi incident in Pakistan took me right into my own childhood where the Dalits were treated inhumanly even in the cosmopolitan Bangalore in the early sixties, it must have been humiliating to them the way Brahmins washed the public tap after the Dalits collected the water, I had never liked those attitudes when I was in the line I felt their anguish.  But that was in too where the African Americans could not drink from the same fountain.
Thank God, my Dad broke all the traditions and had the Dalits sit in our house and drink the tea with us in the same cups we used; I clearly remember Mara, Naga, Muniyamma, Venkat and others.  My Dad was harassed by a few for giving space to “them” and I am sure many of you had similar parents.
has come a long way, just as has.  Out of nowhere the picture of 2007 Indian Idol popped on my facebook screen. There it was a non-mainstream Indian making to the top. This was unimaginable fifty years ago.
It is this model of democracy I want to rave about and thank the Bollywood industry for it, they set the trends of inclusivism, pluralism and secularism in , just at the does. It has broken the class, caste and religious barriers – and offers equal opportunity to all.  Problems are not gone completely, but the progress is significant.
In the two seasons of Indian Idol I have watched, I have witnessed with delight the “slum dogs” moving up, the women folks, the illiterate with no exposure to music and the well trained ones; they were all on the level playing field.  I have admired the comments made by hosts particularly Anu Malik, Javed Akhtar and Sonu Nigam.  No one had an upper hand; it is what they can strive for to be the best and they came from every segment of the Indian society.
I would suggest similar programs to pop in the Middle East, , Pakistan and else where, where they can shape the future leaders of their nations by offering opportunities to every one and let every one learn to compete in serving their nations.
We all have the responsibility to share and explore avenues in shaping the future of each nation and the family of nations. We are all in this together and I salute the Indian Idol for shaping the future of . It gives hopes to every citizen and that is one beautiful aspect of democracy.
Mike Ghouse is committed to building cohesive societies and offers pluralistic solutions on issues of the day – www.MikeGhouse.ne
# # #
Indian Idol 2007
http://video.google.com/videoplay?docid=-3828885197123734159
Bibi Petition
http://www.petitiononline.com/Asiabibi/petition.html
Who wants to be the President of Pakistan
http://theghousediary.blogspot.com/2011/01/who-wants-to-be-president-of-pakistan.html
Posted by Mike Ghouse at 5:51 PM No comments: