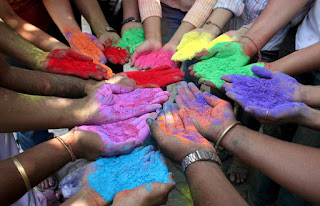 A few years ago, my son, daughter and I were drenched in Holi colors at the Hindu Temple festivities and driving home. At the stop light, the people in cars on either side looked scared, stared at us and took off screeching on the green light... then it dawned on us that we looked red (bloody), green, yellow and mellow.... ...

This festival breaks the barriers between people, between adults and children, family members and friends, and opens up to each other. My kids thoroughly enjoyed throwing the colors in liquid and dust forms on me, they loved it. I would also call it friendship festival as it removes inhibitions. The picture below reflects that sentiments - all colors coming together to create oneness, thus the phrase Vasudhaiva Kutumbakam; the whole world is one famly. Similar expressions are staple in every faith.

Holi is celebrated at the end of the winter season on the last full moon day of the lunar month Phalguna which usually falls in the later part of February or March.

In Vrindavan and Mathura, where Lord Krishna grew up, the festival is celebrated for 16 days. Krishna is believed to have complained to his mother about the contrast between his dark skin complexion and Radha's fair skin complexion. Krishna's mother decided to apply colour to Radha's face. The celebrations officially usher in spring, the celebrated season of love.

Holi is a festival of radiance in the universe. During this festival, different waves of radiance traverse the universe, thereby creating various colors that nourish and complement the function of respective elements in the atmosphere.

For the last 15 years, I have been writing about every festival on the earth, have done a weekly Radio program called "festival of the world" and shared about each festival. Make it simple enough that most people can get the essence of it. For Hindus there is lot more depth and meaning to it, but for the non-Hindus the world over, this gives them an idea about the festival. It is part of the Pluralism education, so we all can know each other and learn to enjoy each other with our own uniqueness.

Mike Ghouse is a thinker, writer, speaker, optimist and an activist of Pluralism, Interfaith, Co-existence, Peace, Islam and India. He is a frequent guest at the TV, radio and print media offering pluralistic solutions to issues of the day. His work is reflected at three websites and 22 Blogs listed at http://www.mikeghouse.net/