I stand with Prime Minister Modi

I condemn the convict who wanted to "Eliminate PM Modi." We cannot let individuals destroy our nation, anyone who believes in eliminating' the other amounts to an animal. God has given fangs, paws, and horns to animals to sort out their differences, whereas a tongue to humans to dialogue. 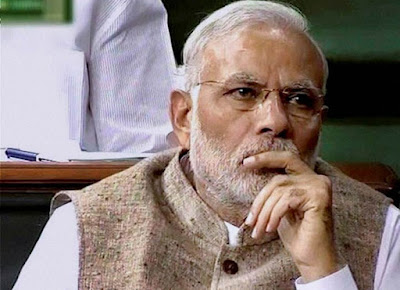 Mohammed Rafiq, the criminal wants to eliminate Prime Minister Modi, and this must not only be condemned, but anyone who is involved in it must also be punished severely. It is a shame that he bears a Muslim name. I urge my Hindu, Muslim, Sikh Esai friends to keep this to only criminals and not make this a Hindu-Muslim conflict.

We cannot have lawlessness go to this extreme.

I am opposed to the policies of BJP/RSS, in the end, they are not good for India. The goons in the name of Sangh Parivar are harassing and killing people for being different, including several Atheist writers, because of that we cannot remain silent when someone threatens the duly elected PM. Two wrongs don't make it right.

Modi is duly elected by the people of India and must be honored, the political difference must be sorted out, and he should be criticized for the mistakes without any doubt, but respect him for he is chosen by the people. It is time to stand with the Prime Minister, and I do.

"The conversation was mainly related to finances about vehicles. But suddenly the 1998 serial blast convict Mohammed Rafiq was heard saying 'we have decided to eliminate (PM Narendra) Modi, as we were the ones who had planted bombs when (LK) Advani visited the city in 1998," the police said.

COIMBATORE:  The Coimbatore Police has arrested a 1998 serial blast convict Mohammed Rafiq after a recorded telephonic conversation went viral on social media in which he is allegedly heard saying he is planning to kill Prime Minister Narendra Modi, the police said.
According to news agency PTI, the police said that the eight-minute long conversation, which was circulated on social media, was between Mohammed Rafiq, who has completed a jail term in the 1998 blast case and lives in Kuniyamuthur in Coimbatore, and a transport contractor Prakash.

"The conversation was mainly related to finances about vehicles. But suddenly the blast convict was heard saying 'we have decided to eliminate (Prime Minister) Modi, as we were the ones who had planted bombs when (LK) Advani visited the city in 1998," the police said.
Coimbatore suffered a series of bomb blasts in February 1998 in which 58 people were killed and property worth crores was destroyed.

"I have many cases against me and have damaged more than 100 vehicles," the man can be heard telling the contractor during the conversation, the police said.

COMMENTSCoimbatore Police formed special teams to investigate the recorded conversation and verify the genuineness of the persons in it, the police said in a press release seen by news agency PTI.

The man has been arrested based on the conversation, it said
Posted by Mike Ghouse at 8:14 AM