In commemoration of Mahatma Gandhi’s birth anniversary week, the India Association of North Texas will hold a Gandhi Peace Walk on Saturday, October 3, 2009 at Spring Trail Park 5964 Riverside Dr Irving, 75039. The walk starts at 10:00 AM, the event is free and you are invited to participate and encouraged to bring canned food to donate to local food banks. 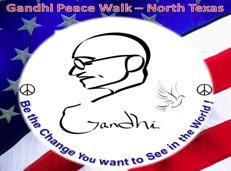 Mahatma Gandhi is a global non-violence hero and a peace advocate. He witnessed injustices in the pre-independent British-ruled India and decided to liberate and free the people of the subcontinent from the clutches of the imperial rule. He launched the famous non-cooperation movement along with several marches inspiring millions of people which led the British to declare India’s independence and the creation of new states that form the present day South Asia. All this was carried out in a non-violent and peaceful manner. We are proud to remember and salute this legendary messiah of Peace and Non-violence.

IANT is a 503c non-religious, non-political, not-for-profit organization established since 1962. The objectives of IANT are: a) to provide civic and political education to people of Indian origin, b) to foster friendship and understanding between the people of Indian origin and fellow Americans, c)to act as a spokesperson for the Asian Indian community.