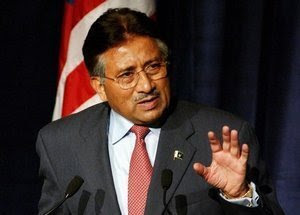 May God help the dream of a peaceful subcontinent come to fruition.

It can happen with one stroke of a pen. It is incredible how relations can normalize with one bold move.

People are fickle, China was a hated nation once, until Nixon signed the pact; Russia was an evil empire once, until the Berlin wall came down; Germany and France fought a 1000 years war until they realized the futility; Ireland and England hated each other until the pact was signed... It is time for India and Pakistan to do it; it is time for Israel and Palestine to do it.

Leadership in both India and Pakistan had been spineless, neither of them had the vision to put things behind and move on.

The people of India and Pakistan want peace and they will accept a bold decision if the leaders have the guts, vision and capability to spell it out to the people.
"Until one is committed, there is hesitancy... Concerning all acts of initiative (and creation), there is one elementary truth the ignorance of which kills countless ideas and splendid plans: the moment one definitely commits oneself, then Providence moves too. All sorts of things occur to help one that would never otherwise have occurred.… Whatever you can do or dream that you can do, begin it. Boldness has genius, power, and magic in it. Begin it now." -- Goethe

"There is a clear distinction between doubts and problems. Doubts provoke obstruction, frustration and discouragement, where as problems inspire motivation, action and diligence. " -- Dr. Abdul Hamid Abusulayman
I do hope our nations come to terms, and get it over with.
Mike Ghouse
www.MikeGhouse.net

“A reasonable progress on this account has already been achieved,” President Musharraf said while addressing the Foreign Affairs Committee of the Spanish Congress on Wednesday.

He said military option was not the answer to the problem. The option of using force to settle bilateral disputes between Pakistan and India had never worked, he said.

He said people of both the countries wanted peace and harmony so that their resources and energies could be utilised in the socio-economic sector.

He said the two countries had taken several confidence-building measures, but the CBMs alone would not be enough to achieve the objective of peace and normalisation of their relations.

The two countries must move towards conflict resolution, the president emphasised.

He termed Indian Prime Minister Manmohan Singh a credible leader and a man of peace who supported Pakistan’s strong desire for the settlement of the Kashmir issue considering it a main cause of tension.

He emphasised the need for the world to deal with crucial issues like terrorism.

President Musharraf said elections would be held in the country this year on time.

He also spoke about Pakistan’s efforts towards peace in Afghanistan and acceptance of the offer by the Turkish prime minister to host talks with Afghan President Hamid Karzai in Ankara later this week.

About Iran’s nuclear programme, the president said Pakistan was looking forward to a peaceful solution to the problem.

Addressing a gathering of overseas Pakistanis, the president said Pakistan had to eliminate extremism and terrorism, which were eating into the foundation of the society. He said the nation had to create harmony and balance in the society to ensure progress and prosperity of the people.

The president said the government was negotiating with Spain for opening a consulate in Barcelona and to starting direct flights between the two countries.

President Musharraf awarded state medals to six Spanish military personnel and eight civilians in recognition of their aid work after the October 20005 earthquake.—Agencies
Posted by Mike Ghouse at 8:16 PM

Email ThisBlogThis!Share to TwitterShare to FacebookShare to Pinterest
Labels: Pakistan